As we enter the month of March, the Skylon Tower begins to plan out how it’s going to celebrate the coming days—one, in particular, St. Patrick’s Day.

St. Patrick’s Day, of course, has come to be associated with food and green beer. While that’s cheerful, the actual roots of the day in our history has a lot more to do with Saint Patrick, who first brought Christianity to Ireland.

You might be wondering, “what does this have to do with what the Skylon Tower is planning for March 17th, the traditional day of the Feast of Saint Patrick? And why green?”

Well, apparently, Saint Patrick was forced to resort to a visual aid in order to explain the Holy Trinity to the pagan Irish of the time. So, he used a shamrock, which is a three-leaf clover that is rumoured to grow all over Ireland. Gradually, the shamrock became part of the evolution of Christianity on the island, and therefore became sort of a national symbol for Irish who had converted.

Green, as a consequence, slowly became the official colour for the celebration of the life (and death) of Saint Patrick, from Ireland all the way to the Skylon Tower in Niagara Falls.

The reason for the beer is actually pretty simple. If you’re Christian, or know Christians, you’re aware of Lent. Lent is a period of about forty days where Christians engage in a fast, and on the Feast of Saint Patrick, Lent’s restrictions are lifted. Naturally, this led to a whole lot of doing of all things that had been restricted by Lent on that day—chiefly, alcohol consumption, and food, although you may have heard of others.

In celebration, the Skylon Tower will be, of course, lit in green with its amazing self-illumination system, you can also order our Rack of Lamb from our dinner menu for those looking for a traditional Irish cuisine.  Of course, the Revolving Dining Room has a menu selection to satisfy everyone, seafood, steak, pasta and much more.

Join us March 17th as both Niagara Falls and the Skylon Tower are illuminated green in celebration of Saint Patrick’s Day.

See our master list of events in Niagara Falls. 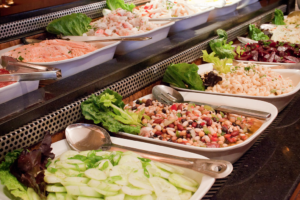 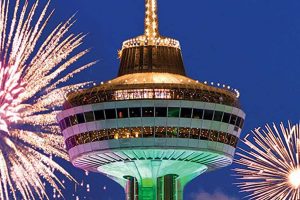