Based upon recent Government of Ontario directives, Skylon Tower will be temporarily closing our facility until further notice. Clients and customers can continue to monitor our website, social media channels or contact us via [email protected] with any questions. We greatly appreciate your understanding and look forward to welcoming you back soon. Until then, be well and take care of yourselves and each other.

The Skylon Tower is at the Top of Niagara Falls, Ontario, Canada.

The Skylon Tower is a recognized member of the World Federation of Great Towers, among other great towers such as the Empire State Building, Eiffel Tower, and the CN Tower. The Skylon Tower stands out, though, as one of the very first among its relatively few and elite counterparts, and remains an integral piece of the Niagara Falls skyline. The Skylon Tower serves to distinguish the town and bring attention to its special attractions.

Perched near the edge of the Niagara Falls gorge, the Skylon Tower is an ode to the extraordinary beauty of the area; the level six rapids froth and rage into a tree-lined canyon, the waterways edged in primal rock formations and glistening shale. The Skylon Tower stands as a reminder that even in the natural world, the beauty of human civilization and human construction can function hand-in-hand with Mother Nature’s best work.

The Skylon Tower, the Top of Niagara Falls, contrasts the other buildings of Niagara Falls, Ontario, Canada, both in that it accentuates the natural beauty of the Falls, and also rises over and punctuates the skyline like an exclamation point. You look up at the Skylon Tower, and in so doing can’t help but also notice the sprawling town itself, rooftops lit and glowing with searchlights slashing across the sky.

It becomes even more of an incredible sight at night, when the falls, and decorative night start to light up creating a soft glow. The Skylon Tower itself is a nightly masterpiece when it’s illuminated in colour, and really serves to turn every night into something special.

How do we know for sure that the Skylon Tower is the Top of Niagara Falls?

Well, the World Federation of Great Towers only has a membership list of fifty-four towers spread across a world of seven billion people and millions of cities and towns which feature such towers. The discerning and learned committee which makes these selections must have a fantastic eye for the importance and grandeur of its members!

The membership of the World Federation of Great Towers includes the Eiffel Tower, the CN Tower, the Calgary Tower, and many others both new and old on the planet. While each is special to its own immediate area, the Skylon Tower is potentially alone as a beautiful, central ornament which sets off the beauty of an entire region.

The CN Tower is also clustered by buildings on all sides, and is eleven years younger than the Skylon Tower. Both, however, are of unique Canadian heritage and form key parts of two iconic skylines. Along with the Calgary Tower, they are all proud to stand with their company.

The Skylon Tower, a proud member of the World Federation of Great Towers, cuts a beautiful picture on the Niagara Falls skyline, and celebrates the natural attractiveness of the area from its perch on the edge of the Niagara Falls themselves.

Visit the Skylon Tower and check out the view from the top of Niagara Falls. 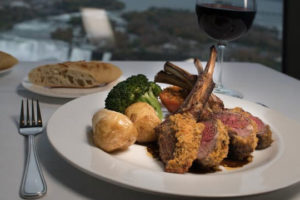 How to Order Gluten Free

Open
Reposted from @suriaan_ Today's #Lunch is #Steak a

Open
Reposted from @aaroncherney A night out with my br