There are a variety of Niagara Falls attractions to entertain tourists: casinos, amusement parks, restaurants, and more. Yet, the real draw to Niagara has always been the breathtaking Falls. From the jagged raw power of the American and Bridal Veil Falls to the sheer volume of the Horseshoe Falls on the Canadian side, tourists come to get an eyeful of one of  nature’s best shows.

Over the years, attractions have been added to give tourists unique and exciting vantage points of the Falls. Hornblower Niagara Cruises, Journey Behind the Falls, WildPlay Niagara, the Spanish Aerocar, and of course the Skylon Tower are some of the more popular. The best way to see the true scope of Niagara Falls in all its glory is from above. Since the exploration of the Niagara Falls and Gorge, people have been working to build structures to showcase the breathtaking views far above the Falls. The following is a brief history of some of these monuments and how they came to be.

In 1824, the first monument was erected at Queenston Heights in white limestone tower, measuring 65 feet (19.8m) tall. As the name suggests, the tower was built to memorialize War of 1812 British Major General Isaac Brock and act as his final resting place along side his aide-de-camp, Lieutenant Colonel Macdonell. In 1838, Irish Canadian rebel Benjamin Lett destroyed the monument with explosives.

Fifteen years later, on October 13th 1853, construction of the new Brock’s Monument began. Designed by Toronto architect William Thomas, the monument was completed in the autumn of 1856. The reconstructed tower stands 184 feet (56m) tall with a 235-step circular stairway up to a small observation pod at the top that shows a stunning view of the landscape.

In 1888, a 250-foot-tall steel tower was built on the top of the Tower Hotel on the American shore overlooking the American Falls. The tower housed several elevators, a seldom used stairway, and three viewing platforms at differing heights. This was by far the tallest and most beautiful structure ever built in Niagara Falls at the time. However, after a bitter court battle, the tower was dismantled and moved to St. Louis. It is also interesting to note that Marconi used the Moose Tower Observatory to transmit one of the first ever wireless messages. Imagine what the roaming charges would have been back then!

In the Fall of 1958, construction began on a 282-foot-tall steel and glass observation tower at Prospect Point overlooking the American Falls. The observation deck was designed to be accessible from the mainland with an elevator shaft to the base of the Niagara Gorge and what is now the Hornblower Boat docks.

The Prospect Point Observation Tower officially opened in 1961, at a cost of $1.25 million dollars and is still in use today.

On March 15th 1961, construction of the Seagram Tower began on the Canadian side. It was completed on June 1st 1962 at a cost of $1.2 million dollars. The tower was developed on a 1.8 acre site on top of the moraine overlooking the Horseshoe Falls (in the area now known as the Fallsview Tourist District).

The tower measures 325 feet tall, making it 655 feet above the base of the Horseshoe Falls. The top of the flag pole is 932 feet above sea level!

In May of 1964, construction began on the Skylon Tower measuring 520 feet tall near to the Minolta Tower, atop the moraine overlooking the Falls between Murray Hill and Robinson Street in Niagara Falls, Ontario. Property for the project was leased from Mr. George Sainovich and the New York Central Railway. A portion of Warren Street, a city of Niagara Falls right of way was leased for 99 years at a cost of $500 per year. (What a deal!!)

Not only is the Skylon Tower designed to have one of the best views of all three of the Niagara Falls, but the Yellow Bug Elevators play a role as well. Each glass-enclosed elevator provides maximum sight lines for up to 30 people as it ascends and descends at 500 feet per minute.

The Skylon tower features an arcade, boutique shopping mall, a family friendly buffet, as well as fine dining in a 360 degree Revolving Dining Room. The tower also boasts an indoor/outdoor observation deck that allows you to explore the view at your own pace. Both the elevator ride and access to the observation decks are free when dining.

The Skylon Tower is home to one of the most breathtaking views of Niagara Falls and is an excellent place to witness both the seasonal fireworks and the illuminated Falls, which are visible at night during the summer months.

Niagara Falls has always been a place where people have come to see an unparalleled display of mother nature’s power and beauty. Over the last 150 years, people have built structures to give onlookers new and exciting vantage points to view the Falls. Structures will continue to get taller and more impressive, but the real gem of Niagara Falls will always be the Falls themselves. No matter where you view them from, they are always an impressive sight. 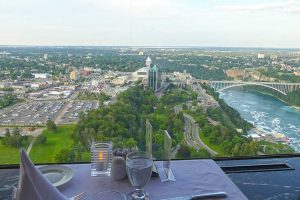 Niagara Falls Restaurant with a View 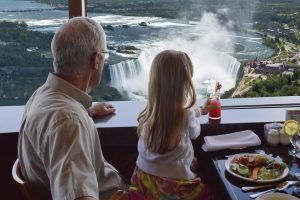 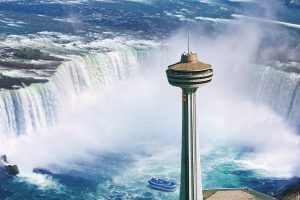 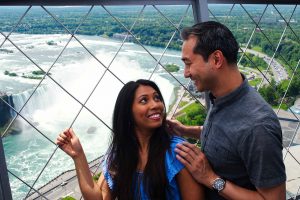 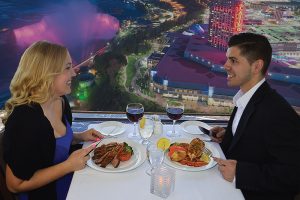